If you’re familiar with the Oprah Winfrey Network’s (OWN) TV show “Welcome to Sweetie Pie’s,” then you already know that the show is based off the popular St. Louis soul food restaurant Sweetie Pie’s. And our fellow Houston foodies probably know that Sweet Times*, part of the Sweetie Pie’s chain, made its way to H-Town in early February.

It took us a few months, but 2 Girls Who Travel finally made it out one Sunday to try it. You know we love some soul food!

We visited the restaurant on a Sunday around 1pm and even though there was a crowd, we were seated right away and given a quick rundown of the restaurant’s concept by a friendly hostess. So the Sweet Times concept is a bit different from the flagship location. As the hostess described it, it’s Mississippi soul food with a “sweet twist.” Our waiter explained it further this way: basically if you like sugar, this is the restaurant for you. (Because what’s a good soul food restaurant without a little diabetes? Val was all in – she’s a sugar fiend. Kim – not so much)

While we waited for the food, we were serenaded by the saxophone player. Yes, there was also live music – also something we love! And the walls of the restaurant were adorned with album covers as well as CD covers for you millennials who know nothing about a record player (ask your parents). 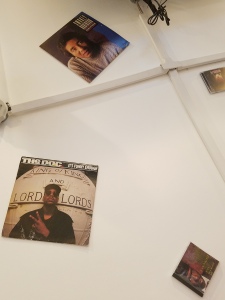 Sweet Times was brought to Houston by Tim Norman, son of Sweetie Pie’s founder Robbie Montgomery, and he was on-hand at the restaurant chatting with guests and even taking a few selfies. Sadly, we were too busy stuffing our faces to get a pic 😦

Oh, sure you want to know about the food. Here ya go!

We started with an appetizer of fried wings. They were good – about 6 wing pieces came with the order and they were seasoned well and fried crispy, golden brown.

Now we all know I tend to order my staple at every soul food restaurant so I grade smothered pork chops harshly. And these were very good. Not as tender as others I’ve had, but I got two nice sized chops, very flavorful and lots of brown gravy. The greens were sweet (as I was told they would be), but I decided I like my greens more salty than sweet. So I could take them or leave them. The mac and cheese made up for it. It was heavy (I hate runny or liquid cheese sauce) and it didn’t have those unnecessary bread crumbs on top. Great flavor and a nice portion. Oddly enough I was expecting the cornbread to be sweeter, but it was a good balance to the sweet greens.

The turkey wing was massive and covered with gravy – the lighter colored – and was very tasty. I highly suggest getting them with your Sunday brunch as they are only served on Sunday. Save your other entrees for other days of the week. I didn’t know what to expect with the dressing, but was very pleased with the flavor. It was light and moist. I don’t like dry dressing. Now all I needed was some cranberry sauce and I would be set! The mac and cheese was excellent and the greens were too sweet for my liking.

One thing to note: Sweet Times is good at anticipating your needs. Every condiment you might ask for is already on the table when you sit down: ketchup, hot sauce, pepper sauce and salt and pepper. Of course we had to get some of our food to go, but we would definitely come back. There were so many other things on the menu we wanted to try – we didn’t even get to touch the seafood. Sweet Times is located at 6356 Richmond Ave., Houston, TX 77057. Check out their website for more details.

We recently visited @thirteenhouston, the new restaurant by @jharden13 that's been getting all the buzz. We didn't know what to expect, but we were impressed! Check our latest blog for a full review. **link in bio.**
Don't mind us. Mentally, we're still in Jamaica 🇯🇲
••• Davis Street APPRECIATION POST •••
*pokes head out*
Ooh! #5CountriesChallenge ... we want to play!
Trez Art and Wine Bar hits on all cylinders.
Happy Monday, yall! Long time, no chat. We pulled ourselves out of the socially distanced rock we've been hiding under to visit a black-owned restaurant in the burbs! That's My Dog, located in Katy, is known for its gourmet hot dogs and we couldn't resist checking them out. Pictured are hot dogs topped with smoked brisket, cheese and onions. Check out our full review of our experience up on the blog now. Link in bio.
So we're pretty much resigned to the fact that we won't be beachside any time soon, but that can't stop us from enjoying some beach eats!
📍SHANGAI, CHINA || This is the beautiful Pearl Tower located on The Bund, a popular waterfront in Shanghai. Guests who dine at M on the Bund are just steps away from this gorgeous view! We were told this super swanky restaurant is frequented by big-time business professionals and lots of high-dollar deals are made here after a few - or several - drinks. The food is pretty good, too! Swipe to see the crab cake and brownie sundae.