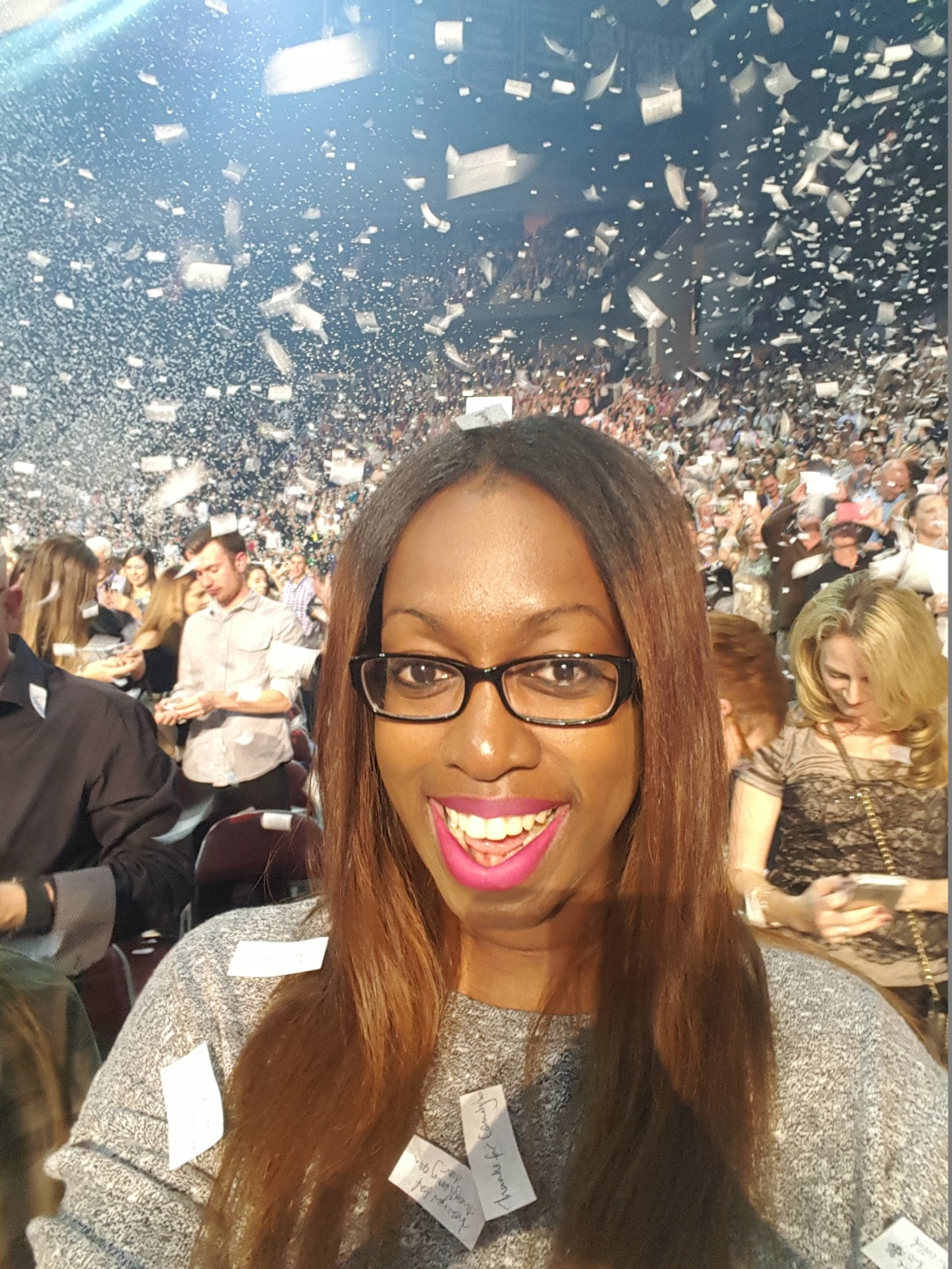 By 2girlswhotravel in Entertainment, Houston on November 14, 2016January 7, 2018
One comment

Val here – half of 2 Girls Who Travel. Can I share with you how I got my entire life at the Adele concert?

First off, for those who may not know, I am a huge Adele superfan. Have been for years – purchased (yes, I bought the CDs) all of her music. And I knew what happened during her 2011 tour. She was forced to cancel dates due to vocal cord surgery. So when I learned she would be touring again, I knew I had to get on the good foot and do everything in my power to get tickets.

So I did. Required me using both computer screens at work (each in a different web browser) with my place in line in the queue. I jumped in the second tickets went on sale to the public. Then it was just a waiting game. My efforts paid off and I was able to get tickets – floor seats at that! I was ecstatic. 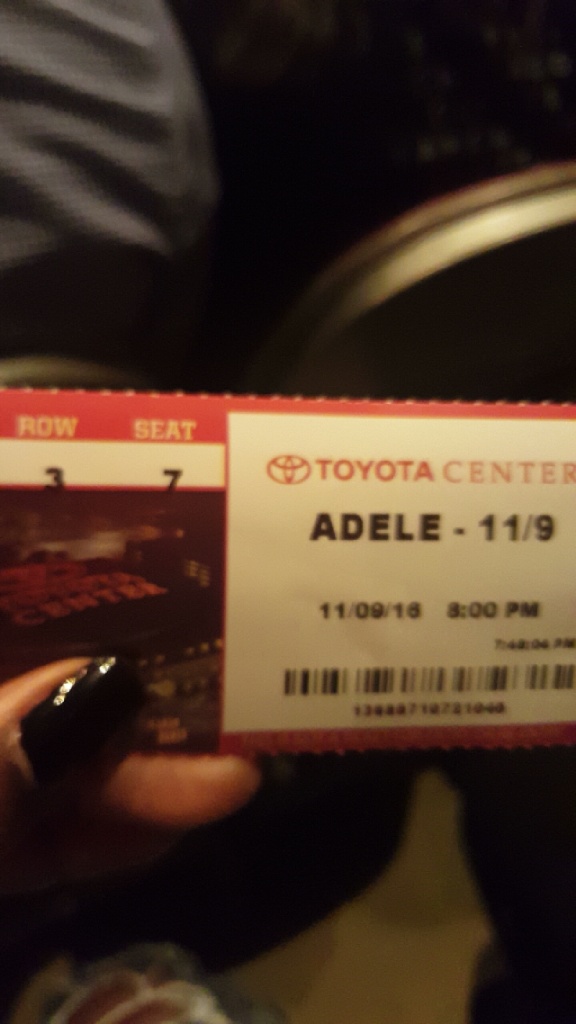 On Nov. 9, 2016, the day finally arrived. Of course the concert was packed. Everybody was taking pre-concert selfies and gearing up for what would be quite a show. A few social media clips of her concerts in other cities featured her belting out her greatest hits as well as a little twerking. Yes, apparently Adele twerked during some of her shows. Who knew?

One thing that was great. The show started on time. No opening acts, no waiting. By 8:10, Adele had risen up on a platform in the center of the floor (perfect for us as we were sitting just a few seats away) and began the first notes of “Hello.”

Crowd goes wild. The rest of the night goes something like this…

Adele’s a talker. She warned the crowd of this. She likes to talk because she gets nervous. We didn’t mind. It made her a real person, not this amazing superstar vocalist we couldn’t connect with.

She’s also funny. That British accent and the occasional dropping of the f-bomb was hilarious. Not crass at all, surprisingly. Only Adele can get away with such profanity and still be a class act.

At one point, a few members of her band were on stage with her and three seconds into the song, she exclaimed, “Oh shit, I forgot to introduce the band!” Music was halted, she made the introductions and started the song over – never missing a beat. Moments before that, she made a little girl’s – and her mother’s – dreams come true when she called her up on the stage to tell her happy birthday and take a selfie. You just gotta love her.

Adele told the audience at the beginning of the show that Houston was the last US leg of her tour, except for a rescheduled Phoenix date later this month. So she was emotional. She loved touring. She loved having her son with her on the road. And she loved all the love she was given. She promised Houston a great show.

And she didn’t disappoint.

All of my video footage has Adele’s beautiful, deep, passionate voice with me singing my heart out off-key in the background. She never seemed tired. Never missed a note. She even told us that as long as the tours, she will always perform the songs her fans want to hear – even if it’s about a relationship that has long past.

The concert ended with a tearful rendition of “Rolling in the Deep” because, as promised, she was crying! Then, large pieces of what looked like confetti fell from the ceiling and upon closer inspection, I could read that it was pieces of paper with excerpts from all of her songs. (Exs. “We could have had it all,” “Everybody loves the things you do,” “Regrets and mistakes they’re memories made”) Great keepsakes from the concert. (Yes I grabbed a handful. Some miraculously landed in my purse. It was fate.)

Hands down, this was one of the best concerts – if not the best – I’ve ever been to. She was a one-woman show with no dancing or extra stuff. Just really good music. If you missed it, hate to say it, but you definitely missed out. Hopefully, you’ll have an opportunity to catch her in the future. Check out some shots of the concert below. 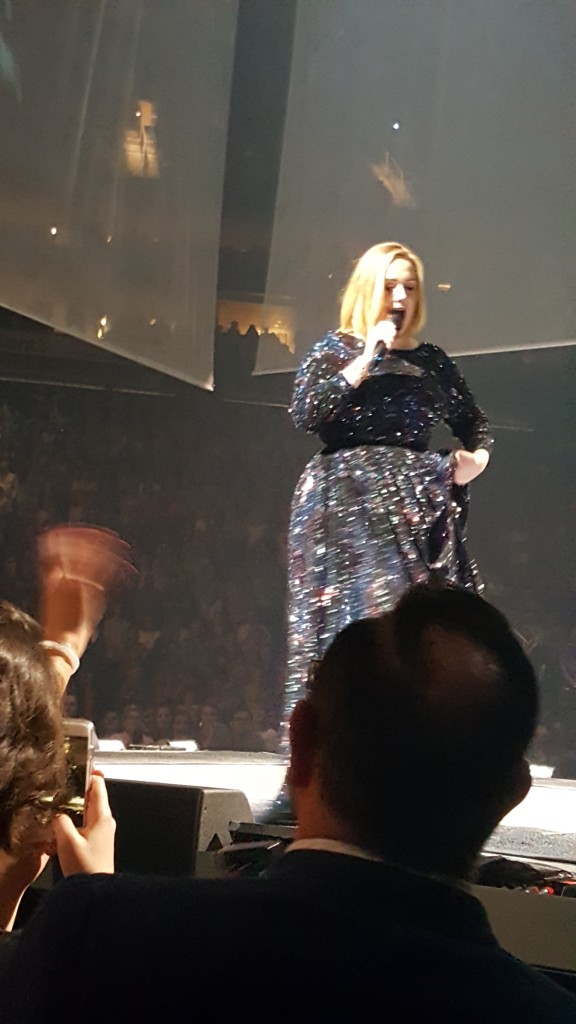 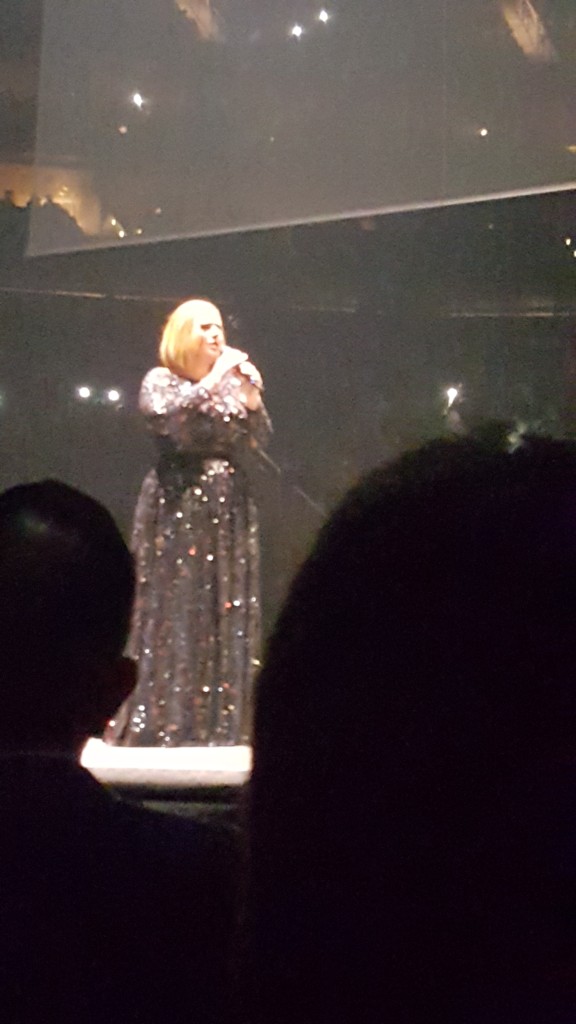