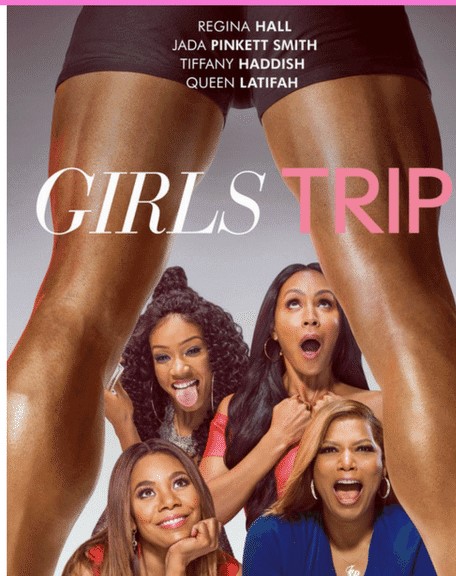 2 Girls Who Travel at the Movies: “Girls Trip” Rakes in $30.4M Opening Weekend

Kim here – half of 2 Girls Who Travel. This weekend I spent some quality time with my Love.Work.Repeat. family for a Girls Night Out at the Movies. And what better movie to gather all the ladies at than the much anticipated “Girls Trip?”

“Girls Trip” raked in a whopping $30.4 million; the biggest opening weekend for a live-action comedy in 2017.

The film follows Regina Hall (Ryan), Queen Latifah (Sasha), Jada Pinkett Smith (Lisa) and Tiffany Haddish (Dina), who in all, make up the “The Flossy Posse,” former college roommates who have drifted apart over the years and plan a trip to Essence Fest to reconnect.

According to the film’s director Malcolm D. Lee, Essence was the best place to set the movie because it’s “the only festival in the world that celebrates black women.”

I totally agree. The Crescent City is an awesome girls getaway and during Essence Fest, it’s an amazing, nonstop, good time. Rather than give away all the spoilers, just know that this movie was a laugh a minute and the new girl on the block, comedian Tiffany Haddish, steals the show as that crazy, ride-or-die girlfriend who has your back.

*When you go with your girls, you all will inevitably be trying to figure out which girlfriend embodies which character from the movie on your girls’ trips.

The all-star cast also has some awesome star-power and cameos: Larenz Tate, Morris Chestnut and Mike Epps, not to mention the musical guests – Puff Daddy, Ne-Yo, Mariah Carey and many more.

African American movies, and more specifically, African American women movies don’t usually have high expectations as far as Hollywood is concerned. So the early success of “Girls Trip” has turned some heads!

So gather all your girlfriends and support director, Malcolm D. Lee (“The Best Man,” “The Best Man Holiday,” “Welcome Home, Roscoe Jenkins”) and Producer Will Packer (“Think Like a Man,” “Stomp the Yard,” “Ride Along”).

I had an awesome time with my girls. You will too!

Just returned from our trip to Cancun. We stayed at the Dreams Vista Cancun Golf & Spa Resort. Everything was great 🌟 Check it out!
Last night's @blackcheftable event hosted by @kulture_houston featuring food from Chef Reginald Scott was nothing short of amazing!
It was all good vibes at the media preview for @thegreasyspoonhtx newest location in Pearland. We WERE NOT playing with those oxtail, okay? Soft opening this weekend!!
Hey yall 👋🏾👋🏻
We recently visited @thirteenhouston, the new restaurant by @jharden13 that's been getting all the buzz. We didn't know what to expect, but we were impressed! Check our latest blog for a full review. **link in bio.**
Don't mind us. Mentally, we're still in Jamaica 🇯🇲
Jamaica owes us not a thing!!! Except maybe another visit soon...
••• Davis Street APPRECIATION POST •••
*pokes head out*