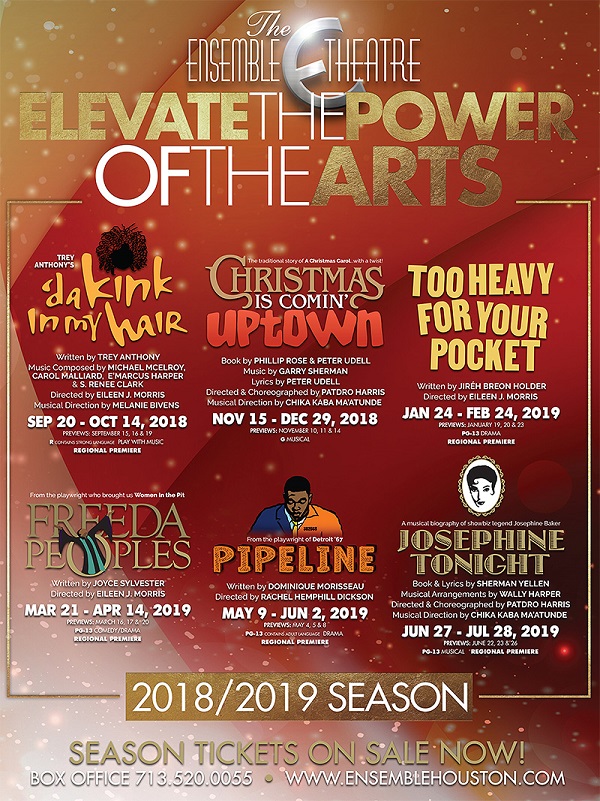 Elevate the Power of the Arts

If you aren’t familiar with the Ensemble Theatre, we need to change that immediately. Located in Houston’s Midtown District, The Ensemble was founded in 1976 by the late George Hawkins. The mission of the Ensemble is to preserve African American artistic expression and enlighten, entertain and enrich a diverse community.

The operations and programs of The Ensemble, which include educational workshops, artist-in-residence experiences, and live performances for students both off-site and at the theatre, and the Young Performers Program, benefit a multicultural audience.

The Ensemble’s executive director, Janette L. Cosley and artistic director, Eileen J. Morris, lead the theatre in producing the Mainstage Season of six contemporary and classical works devoted to the portrayal of the African American experience by local and national artists and playwrights.

More than 60,000 people are reached through The Ensemble’s programs each year. So you may wonder how you can help support the theatre in continuing their programming.

Take a look at the upcoming, new season of programming. 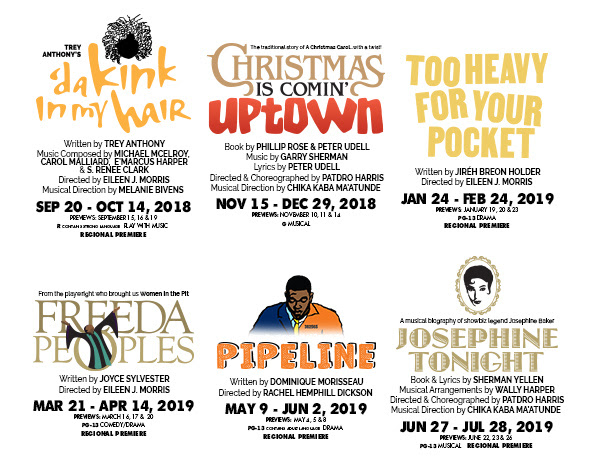 Synopsis:
Set in a Caribbean hair salon of a West Indian stylist in Toronto, ‘da Kink in my Hair gives voice to eight Black women who tell their unforgettable stories in a kaleidoscope of drumming, singing and dance. It is a testament to the challenges and triumphs in the lives of contemporary Black women, many of whom are immigrants to North America from the Caribbean. Mixing laughter and tears, revelation and inspiration, the unapologetically intense stories of each woman are woven together in this powerful piece.

Previews: November 10, 11, and 14
OPENING NIGHT: November 15, 2018
Runs: November 15 – December 30, 2018
Synopsis:
Who doesn’t love a classic with a twist! The traditional story of “A Christmas Carol” gets a jazzy and colorful makeover! In this version, Scrooge is a Harlem slumlord who is just about to foreclose on a tenement house and a church when a surprise visit from an “old friend” and some groovy ghosts make him reconsider.

Synopsis:
In rural Tennessee at the height of the Civil Rights Movement two young couples struggle to understand justice, love, and their own responsibilities. When Bowzie gets a scholarship to attend Fisk University, he has the opportunity to improve his family’s life. His education goes beyond the classroom, as he becomes a Freedom Rider and joins the fight against racism in the Deep South, leaving his obligations as a husband and friend behind. A beautifully written look at the personal cost and private struggles behind public events, Too Heavy for Your Pocket speaks powerfully about the bonds of friendship and what defines true family.

The Bible says all have sinned and fall short of the glory of God, there is a none righteous not even one (Romans 3:32). Therefore, the church is the perfect place for spiritual growth. Freeda Peoples deals with the relationships between the deacons, trustees, and the new pastor and how no one is who they really seem to be. This comedy/drama will have you rolling in the aisles.

Previews: May 4, 5, and 8
OPENING NIGHT: May 9, 2019
Runs: May 9 – June 2, 2019
Synopsis:
Nya, an inner-city public high school teacher, is committed to her students but desperate to give her only son Omari opportunities they’ll never have. When a controversial incident at his upstate private school threatens to get him expelled, Nya must confront his rage and her own choices as a parent. But will she be able to reach him before a world beyond her control pulls him away?

A musical biography of showbiz legend Josephine Baker. Josephine Tonight draws on the early life of the internationally known singer, actress and nightclub sensation who wowed audiences in America and Europe in the first quarter of the 20th century, and reveals the relationship of the young Josephine and her laundress mother who steers her toward success and then guides her to remember her roots.

For Tickets to the new season, visit www.ensemblehouston.com or see the box office info below.

Show Nights Ticketing:
The box office is open two hours before the start of every show.

Last night's @blackcheftable event hosted by @kulture_houston featuring food from Chef Reginald Scott was nothing short of amazing!
It was all good vibes at the media preview for @thegreasyspoonhtx newest location in Pearland. We WERE NOT playing with those oxtail, okay? Soft opening this weekend!!
Hey yall 👋🏾👋🏻
We recently visited @thirteenhouston, the new restaurant by @jharden13 that's been getting all the buzz. We didn't know what to expect, but we were impressed! Check our latest blog for a full review. **link in bio.**
Don't mind us. Mentally, we're still in Jamaica 🇯🇲
••• Davis Street APPRECIATION POST •••
*pokes head out*
Ooh! #5CountriesChallenge ... we want to play!
Trez Art and Wine Bar hits on all cylinders.